I survived the EMP Pop Conference 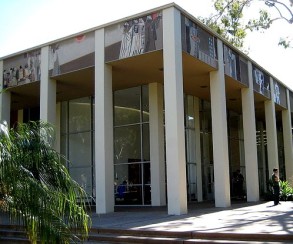 Wow, that was a crazy month! And another begins, as I return to campus for spring quarter here at UCLA. This quarter system is a real trip . . . between the 10-week courses and the lack of seasons here in Los Angeles, there is a very different academic ebb and flow than the one became accustomed to on the East Coast.

But enough complaining — I am eager to take on some new courses and extremely grateful and humbled to have had the opportunity to present at last week’s EMP Pop Conference. Despite the fact that our panel was programmed at the same time as a gathering of powerhouse music writers (Greil Marcus and Ann Powers, anyone?) we had a solid turnout, including a number of my friends and former classmates at Rutgers. David Adler, Nate Chinen, and Phil Freeman all gave fantastic, engaging papers, and we had time for a lively Q & A session afterwards. Thanks also to the Music of our Heart for a nice blog recap.

I’d add a small quibble, though, to the characterization of the conference as a “Deep Hang.” I would call it wide, perhaps — the sheer size and buzz of the conference was invigorating, but the depth was uneven at best. There was plenty of deep thinking going on in some places, though: a fantastic roundtable conversation moderated by Greg Tate featuring Vijay Iyer, Jose James, Mazz Swift, and Butch Morris was one highlight. Morris held court for much of the session, defending the word jazz from its recent slough of detractors, and all four shared heavy insights into the role that cities have played in shaping their unique musical visions: “nodes in the network,” as Iyer eloquently called them. Guthrie Ramsay’s panel “Cities, Hegemonic Sound, and Blackness” was another deep and real take on issues of representation in African American music culture, and the closing keynote speech by ?uestlove was highly entertaining for its charming geekiness.

Best of all, though, was the simple act of reacquainting myself (just a little bit) with the city that I left behind last year. Attending the opening reception at Le Poisson Rouge, I caught a whiff of nostalgia for my first concert in the City, hearing Claudia Acuna, Jason Moran, William Parker, and others at the 2009 Winter JazzFest. And I had the pleasure of reconnecting with my three closest friends from Rutgers — Sean Lorre, Paul Brady, and Jared Negley — while catching the Gerald Clayton Trio’s impeccable set at the Jazz Standard. This confirmed the theory that I presented in my paper on Saturday: that “the hang” plays an important role in shaping music communities, and that jazz musicians are especially astute when it comes to making hangs happen.

As I return to my nose-in-the-books life here in Los Angeles, then, I’m exceedingly grateful to have stocked back up on the New York vibe, and hope that the spirit of the hang continues to help me along for another ten-week dive into the depths of academia.